For the mechanic that lets you jump down floors, see Floors#Descending.

Dropping is a mechanic used to drop items in your inventory onto the floor below your player. They can be freely walked over, and if a toilet floods, the dropped item will be unaffected whatsoever. The only way to interact with dropped items is to pick them back up.

If you try to drop something over another dropped item, it will fail and your player will say "No space to put that there," or "I can't put that there," etc. Trying to drop an item on top of another item in TE1 will result in a beep sound effect. You also fail to drop items onto doors and contraband detectors (dropping soil in tunnels will fail as well). When interacting with objects in the prison (i.e., hiding in a locker, sleeping in bed), you will hear the dropping sound effect but nothing will be dropped.

There is a limit on how many dropped items can exist at a time; dropping too many items results in the oldest items disappearing.

Preset dropped items (like the Lightweight Pickaxe in the Rattlesnake Springs' mine) act as rewards for the player to retrieve.

A dropped item looks similar to their inventory sprite counterpart. However, dropped items take up one block unit while their counterpart is much bigger. In The Escapists 2, there are some exceptions. A Sturdy Shovel or a Flimsy Shovel that is dropped looks exactly like a Lightweight Shovel, a Sturdy Pickaxe or a Flimsy Pickaxe that is dropped looks like a Lightweight Pickaxe, and similarly Sturdy or Flimsy Cutters will look like Lightweight Cutters. 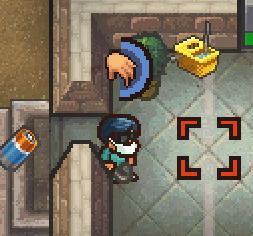 The icon symbolizing an item dropping

To drop items on PC, hold the right mouse button over the inventory item you want to drop. An incomplete hand icon should appear above the player. If you keep holding until the hand icon is complete, the item will be dropped.

The B key on a controller can be used for Console versions.

When non-contraband is dropped on the ground, NPCs will not care. No one will try to take it, nor move it.