A lockdown is triggered when the player misses a Roll call during the daily routine, if the player knocks out 20% of the Guards in the prison or if a Guard looks in your cell and doesn’t see you in Lights Out (countered by a bed dummy). The Guards will call backup in fear that you have escaped because of a missed rollcall, 2 knocked out guards or reaches 5 security level ( The Escapists 2 ). The player is then given 98 seconds to escape the prison before backup arrives.

In the Xbox One/PS4 Editions the player is given 3 mins to escape the prison before back up arrives; the countdown timer is shown in the middle of the screen. If backup arrives, you will be sent to solitary.

If you are spotted by a guard, the lockdown is called off and backup will not arrive. There may also be a very rare chance that leaving your cell using a Cell Key when waking up after Lights Out, a Lockdown can occur.

In The Escapists 2, Riot Guards and Guard Dogs will be deployed to search for the missing player/inmate. The dogs will be able to track the player making it impossible to hide.

For Lockdowns in TE2, more information can be found at the Security Level page.

Strangely, the regular inmates missing Roll Call routines does not count towards a lockdown. However, the Guard Dogs will still be deployed and knock out those inmates (The Escapists 2).

The Countdown timer that appears at the top middle of the screen during a lockdown. 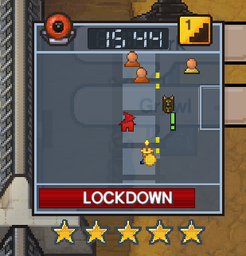 Lockdown in the Escapists 2

When the backup timer reaches 0 seconds, you are immediately sent to solitary and all of the walls, floors and vents are fully repaired, basically resetting the prison.

It seems that if spotted by a guard, the backup is called off because they have realized you have not escaped.

When lockdown starts your Heat skyrockets to 99% (100% on Console, and Mobile versions), and remains up there until the lockdown is called off. (starts going down if you are seen by a guard).

If you don't want to lose your contraband items, you will have to put all the contraband in your desk and turn yourself in!

When attempting to escape in a lockdown, you will be shot if you are not underground or carrying a body.

Lockdowns are usually caused by attempting a riot escape, which will allow access to the front gate.

One of the easiest ways to escape a prison in a Lockdown is to perform a Prison Takeover. This is done by beating up and binding 80% of the guards and getting a note from the Warden saying that the main gates are open (the ones with white locks).

If guards get up, they are no longer counted unless they are brought down again, so you will need Duct Tape. Set up a hostage area to keep the guards in, so that anyone who approaches the area can be taken down. After that, be swift so that the timer does not run out, and avoid towers.

The music for Lockdown in Santa's Sweatshop, Escape Team and Duct Tapes Are Forever is different.

Constantly digging or chipping at walls to make a lockdown makes inmates mad, the perfect cover for escape. (Escapists 2 only, needs verification)

In Escapists 1, snipers turn off when 20% of the Guards are knocked out. The reason for this is unknown. Note: Snipers are turned on when you miss morning rollcall.