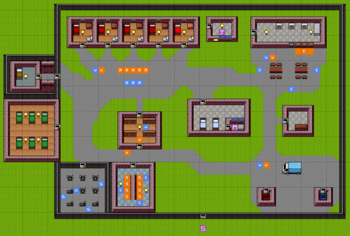 The prison editor also allows you to set the background music, NPC levels, prison style and their 'ground' type, for info on creating your own prison, please view this link.(Doesn't work at the moment)

This article is a stub. You can help The Escapists Wiki by expanding it.

The Basics - Create a Prison, the "Properties" Panel and the Layers

(Useless a little but it can help: When you start the prison editor on the game launcher, go to the "Project Panel and select "New")

The menu where you start in the Prison Editor

First, Before begin your prison, you will choose the name (e.g: Ocean Compound, you can change it every time in the "Properties" Panel) and the Tileset (you can't change this after this step and note if you choose the Tileset this will not give you access to special Objects and Tiles) of one of the 6 prisons available by default in the game (e.g: Irongate or Shankton).

What you have when starting the building of your prison

Then, you'll see the "Properties" Panel where you can choose the amount and the "medium skill level" of the Inmates and Guards (Amount: 5 to 20 Inmates and 5 to 15 Guards max; Level: Low to High) . You can also change the Prison's Name, the Prison Grounds (InsideOnly|Outside/Inside|Outside), and the Warden's Name and Note.

You can also choose the jobs available in the game (e.g: Janitor or Tailor), and the starting job. You need at least 3 Jobs but you can't choose more than 5 jobs in one prison.

The layers are Underground, Ground (the main layer), the Zones, the Vents (Optional), and the Roof. Most Tiles and Objects works only in a specific ground (Underground for Landmines, Ground for most of the Objects and Tiles, Roof for Spotlights and Roof Pipes, Vents for Vents Walls, and the prisoner's Stashs can be place on all layers).

(Note: a tile is a "block", a "square" thing like a wall or a crate and here "Main Structure" means the walls, the fences, the bars, the ground, etc...)

It's the most important in prison creation : the Main Structure. When you start the creation close the "Properties" Panel and you have two panels oppened : the "Tiles" and the "Objects" Panels. For now we'll only care about the "Tiles" Panel. Depending of the Tileset selected, you have around ~91 Tiles available max with some purple tiles because they're not on your Tileset.

You can start by the Perimeter Walls/Fences or the Prison's Compound or every part you want first, there is all you'll need in the "Tiles" Panel to create your own prison's Main Structure.

In your "Tiles" Panel there'll be walls, both normal and electric fences, floors, (note there is some different types of floors. the "Inside Floors" like planks and concrete and the "Outside" floors like paths and grass) and the Obstacles (e.g: Water or "Renforced Walls).

There is all the doors of the prison such as Master Doors, Staff Doors, "Always Open" Doors and Job Doors.

This is all the main furniture for cells. There is Toilets, Prisoners and Players Beds and Desks and Cable TV (not really exclusive to Center Perks).

There is all the 8 Gym stuffs for your prison. you don't need to have all of them, just have some that raise Strengh and some that raise Speed (for Strengh, Punch Bag is recommended because it's the fastest and easiest way.).

This is everything you need about your Prison Jobs from Washing Machine to the Delivery Job Truck and the Job Board (it's the most important of them).

This is how the Guards and Inmates will be at rollcalls, how they move when they "free", where the NPCs spawns and must be.

Everything about guard and prison security: the Contraband Detectors, the Tower guards, the Generator, the Cameras, the Spotlights (Roof Layer only), the Landmines (Underground Layer only) and Guard Beds (used by off duty guards at night and are mandatory).

There is some stuffs and things and some of them are optional. It's here you'll find the tables and their chairs, Prisoner Stashes, lights, Bookshelves and Internet Terminals.

Optional. If you want Jeeps, you will find here Jeep's Waypoints. You can use only one Jeep Path.

Optional too. Here you can find the Ziplines's Starts and Ends. Each Zipline's Start heads to a different direction like North, South, East, and West.

It's there you will decide which zone of your prison is used as which function. You can have (1 only obviously) your cell, 10 Cellblocks (or just Cells), 3 Safezones, RollCall Zone, Canteen Zone, Solitary Zone, Showers Zone and the Works Zones (like TailorShop).

Infirmary, Medics, Employments Agents and Guards Offices, Generator Room and Warehouses (the cabins with unlimited wood and metal) are not Zones.

SafeZones are Outside Areas not considered Out of Bounds when your prison's grounds are InsideOnly (and where you can be after 22 PM in Inside/Outside Prison Ground).

it's recommended to you to save your project before create or modify Zones because often there is a bug where every objects disappears when creating or modifying Zones.

These Notes are mandatory for validate and use your prison!

You need 1 Guard Bed for 2 Guard. If you don't have enough Guard bed you can't validate your map. e.g: If you want 10 guards you need 5 Guard Bed.

You need every Zones for make a liveable prison and validate it. But have any Safezone, all WorkZones, all Cellblocks is not mandatory.

You need at least 5-20 Inmate Rollcall Waypoints and (surely) Inmate Showers Waypoints, 1 Inmate Food Collection Waypoint, 3 Guards <Rollcall|Gym|Showers|Canteen> Waypoints in their rooms and 3 Prisonner and Guard FreeRoam Waypoint to validate the map. You need also one and only one NPCs's Spawpoint ,the Employement Agent and Medics Waypoints too.

You must have at least 3 jobs in your prison but you can't have more than 5 jobs.

Your Prison must have a Prison Name, a Warden Name and a Warden Note.

Just some Notes about things that are not important. You can ignore them, they changes nearly nothing.

You can't have the Public Phone or the Signs like any exclusives items and things.

Many players put the Jeep's Waypoints every 4-6 tiles on his way .

The Inmates will use every Prisonner Bed and Chests even if it's not in a "Cellblock" Zone.

Ctrl+Right-Coat : Cover a area in what ever material you selected.

Shift+Hold Left Click: "Cover an area with this and paste it else where"

Validate, Use and/or Publish

If there are not errors in your prison, you can Validate it to use it and Publish it. It's mandatory to Validate your prison if you want to use it, because you can't use or publish it if you don't validate it. To validate, go to "Finalize", select "Validate" and then if there is not error click on "Export". You can also publish it on the Steam Workshop by simply select Publish after validate it or publish the ".Cmap" file found at "%User%\Documents\The Escapists\Custom Maps" of your prison on a third party site.

This is all notable bug and lags that can happen only or mostly on customs prisons.

"Too many entities" in-game lag:

"Everything is gone" editor bug:

It's happen often when you place or select a Zone. It erase every objects in your map and you have to replace them all. A simple way to preventing it is to save your project before create or modify Zones and load this save when this bug happens.

It's happens with the same circunstance as the "Too Many Entities" lag. At the character screen (the second with all the guard and inmates) and your prison have 20 Inmates and more than 10 Guard, when you name the 4th or 6th Guard, the Guard on his side will have the same name as him and the first guard you named is a "hidden" inmate.

It's a bug that happen with ladders. When you climb a ladder or climb down a ladder and there is a wall where you supposed to go when you done this, you get stuck in this wall and you can only climb (up or down) the ladder. It's happen because you'll never go where is the ladder when you use it. A simple way in-game is before anything with a ladder chip the wall on near it. A other way in the editor is to simply always put ladders in a 3*3 room and this will never happen.

"Everything go to his layer!" editor-gameplay bug:

If you put a Sun lounger for example in the vents or the roofs, validate and play the prison, the sun lounger will be found at the ground and not at the Vents. Like it was said upper most of the Objects can only be at a specific layer: every objects put in a wrong layer return to the layer they're supposed to be. it's useful for glitch some doors.

"There is a secret passage in my wall!?!?!?" editor-gameplay bug:

If you place a chair on a wall and sit on it, you can get on the incorrect side you were sitting on. useful for making player only access sutility rooms without having to chip any wall around the room.

"i can't sit on the visitor chair!?" gameplay bug:

When you access a visitation in the visitor side, you are not able to sit on the visitor chair. NOTE: this glitch works on every prision, not just on custom prisions.