"Maps" redirects here. For the Map system in The Escapists 2, see map.

The Escapists: There are currently 6 main prisons, 6 bonus prisons, and 5 DLC prisons included in the game. They all differentiate in quality of security, and all the main prisons get progressively more difficult to escape from. 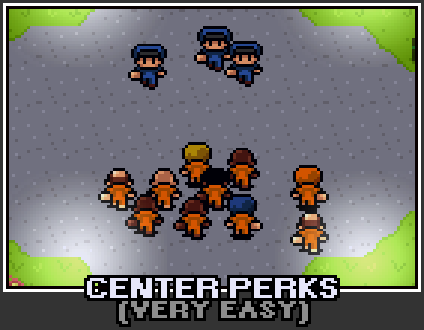 Center Perks is currently the easiest prison in the game. It includes a fully integrated ventilation system, 5 job options, (janitor, laundry, kitchen, mailman, metal shop), and a lenient schedule with lots of free time. That is why you started there in the first place. 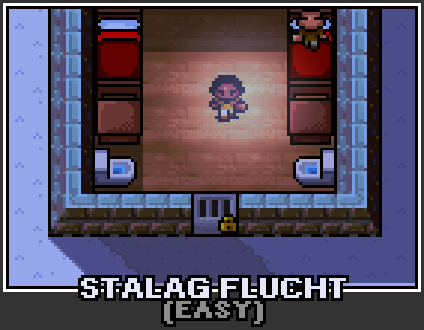 Stalag Flucht is an easy prison in the game. It houses two inmates per cell, has 5 job options, (gardening, tailor, library, woodshop, unloading), and enough free time to make yourself feel half comfortable. 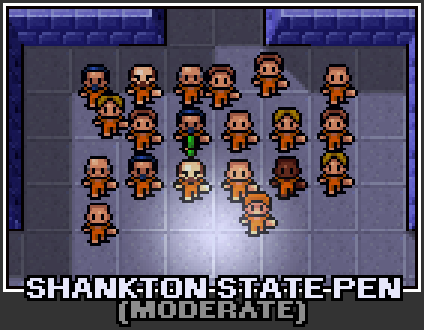 Shankton State Pen is a moderate prison in the game. It houses one inmate per cell, has 5 job options, (laundry, kitchen, woodshop, metalshop), and medium amounts of free time. 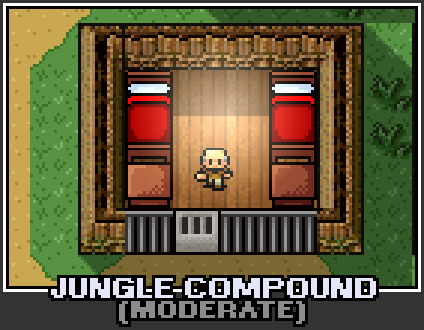 Jungle Compound is a moderate prison in the game. It houses two inmates per cell, has 5 job options, (tailor, laundry, mailman), and medium amounts of free time. Also, to escape you require some Fake ID Papers. This prison is the first one to have a perimeter jeep. 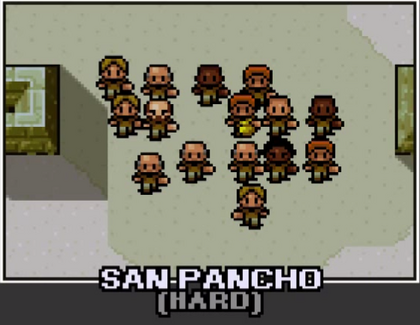 San Pancho is a hard prison in the game. It houses 4 inmates per cell, has 5 job options, (gardening, tailor, library, kitchen, unloading), and few amounts of free time.

HMP-Irongate is currently the hardest prison in the game. It houses 1 inmate per cell with 1 security camera in each cell, has 5 job options, (janitor, mailman, woodshop, unloading, metalshop), and minimal amounts of free time, it is also the only main prison which is on an island. Plus, the guards have Stun Rods, meaning that they will instantly kill you. Forget getting a guard outfit from them! 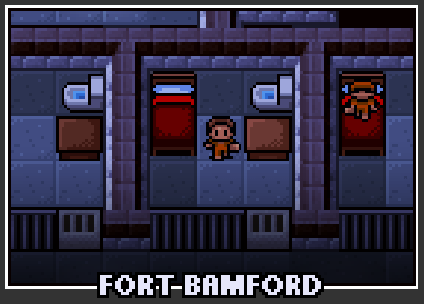 Fort Bamford is one of the first bonus prisons in the game. It was firstly designed as a prize for escaping all of the prisons, but as plans changed, it ended up being a DLC prison. 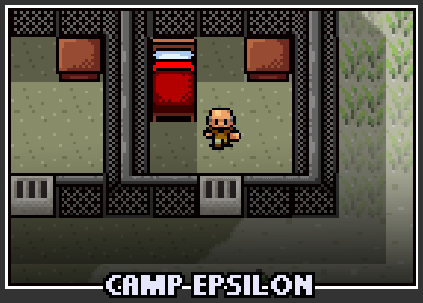 Camp Epsilon is the second prison of the bonus prisons in the game. It features a fenced camp on a Sandy Plain, similar to a desert or savanna. 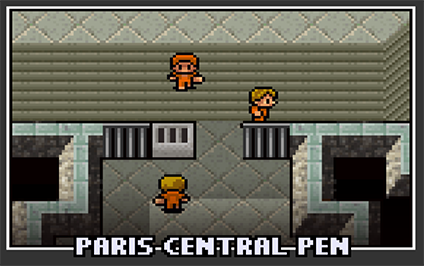 Paris Central Pen is the third bonus prison added to the game. In this prison you can use a zipline to escape. 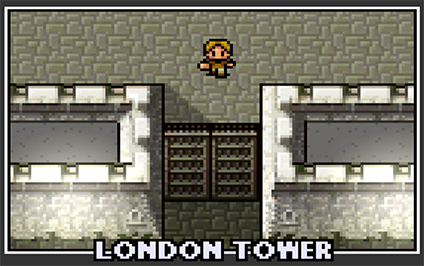 London Tower is the fourth bonus prison added to the game. It is based of the real Tower Of London and the map structure resembles the actual Tower. 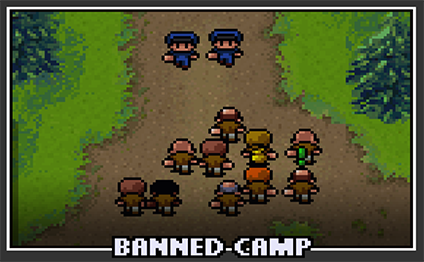 Banned Camp is the 5th bonus prison added to the game. 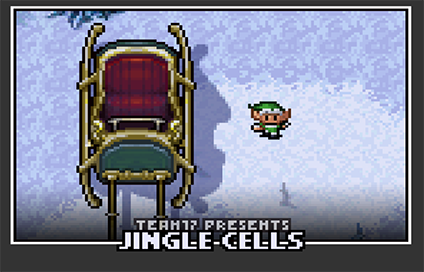 Jingle Cells is a free prison added to the game and follows the events of the free DLC item Santa's Sweatshop. 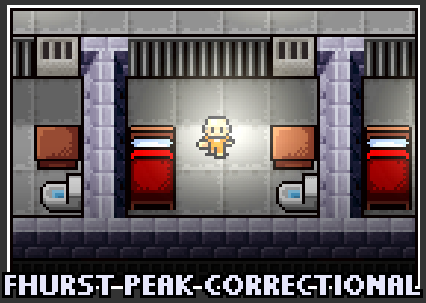 Fhurst Peak Correctional Facility is the first prison of the DLC prisons in the game, and was the first prison, being created in the early access phase and later removed and remade as DLC. It is considered one of the harder prisons. It was given out for free to people who owned an early-access copy of the game as thanks from Team 17 for testing the game. 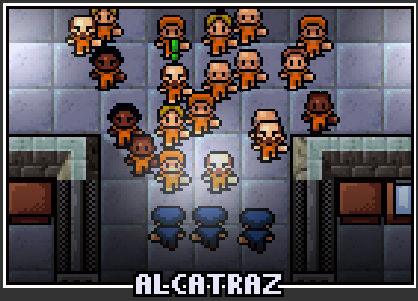 Alcatraz was the second DLC prison to be added to the game. It features custom music and tiles.

It is also one of the only prisons on the mobile edition.

The prison is similar to HMP-Irongate (Irongate is based off of the real-life Alcatraz). 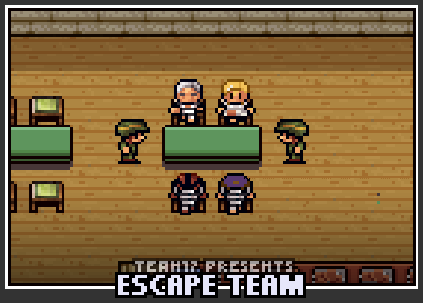 Escape Team was the third DLC prison added to the game and features custom music and player sprites and more. 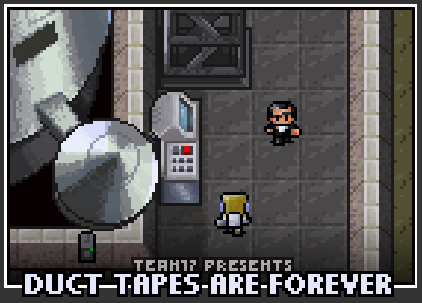 Duct Tapes Are Forever is the 4th DLC prison. 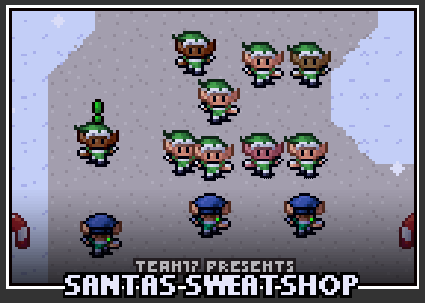 Santa's Sweatshop is the latest DLC added to the game.

The Escapists 2 introduces Transport Prisons. These are special prisons with different gameplay, read the article for more info.

This a tutorial prison for the character to learn the basics of the game.

After a ridiculous amount of escapes and devastating review from the inspection committee, the warden of Center Perks decided to rip his beloved prison down and rebuild a more secure version. But as the saying goes, 'some people never learn'.

Howdy, partner! It's well known in the old West that if you evade the hangman's noose, the local Sheriff sends you to Fort Rattlesnake. Rustled up alongside the lowest outlaws in the county, you decide to break out of this calaboose - be it by hook or by crook!

Captured behind enemy lines, you and your squadron find yourself thrown in the notorious K.A.P.O.W. camp. not content with sitting out the rest of the war, you decide to comb your quiff and find a way out of this joint in true Hollywood-hearthrob style!

Nobody's feeling as out-at-sea as these cons do! Someone 'clever' decided this dilapidated drilling platform was the perfect place to lock away lawbreakers - and they were right. With nothing but a sea-view miles around, it's no wonder it has a zero percent escape record.

*Brrrrrrrr* - Quite the frosty reception! You find yourself packed off to the coldest corner of the Siberian tundra and forced to work in horrible conditions. Before long you find yourself yearning for warmer climates and a way back to civilization!

This secretive military base in the desert is the definition of high-security. if you can slip by the incredibly dedicated guards you may just come across technology that's out of this world...

In the not-too-distant future, an overpaid think tank of pioneers came up with the air-brained notion of Cons in Space. Here we find cosmos-adjusted criminals shipped to secure interstellar stations, designed to solve the problem of Earth's overcrowded prisons.

You and the vultures overhead know what fate awaits once this train reaches the end of the line. If you plan to see another sunrise you'd better disembark by whatever means necessary.

Prisoners are being shipped off in droves to a remote island far, far away from civilization. Not keen on being marooned, you'd much prefer to find a way off the boat before you stand about as much chance as a fish out of water.

Fasten your seatbelts, cons! Only the most hardened of criminals get an entire plane during the escort phase. One thing's for sure though - it's a one-way-ticket, so you'd better act fast before landing.