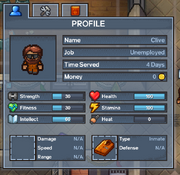 Check out your stats!

The Profile, also known as the player menu, is a display in-game. It shows information about the character.

To open the player menu, press [q] on desktop, or [Y] on consoles. You can change the player menu key by going to "Help & Options" in the pause screen and selecting "Player Menu".

To bring up an NPC (Inmate or Guard)'s profile, press interact while near them. This will cause them to stand in place, facing you (though an inmate with low Opinion may still attack you, closing the menu.) The profile cannot be brought up for characters that are fighting.

The tabs on the top can be moved between. On the player's profile, there are two extra tabs. The crossed tools icon is the Crafting menu, allowing you to see recipes and craft items. The book icon is the player's Journal, recording accepted Favours.

On an NPC's profile, there can be up to two extra tabs. The present icon is the gifting menu, allowing the player to give items and money to the character selected. Items given affect opinion, with exact changes depending on the item. If an inmate has a favour or is a vendor, their profile will display a green exclamation mark or a shopping basket tab, respectively, allowing you to view, accept or decline favours, and purchase items from vendors whose opinions of you are high enough.

Interacting with a knocked-out character shows a different profile interface with two tabs. One is still the normal profile, but the other (which is opened upon interacting) shows the character's inventory, with six slots for items. Items can be taken from or placed into a character's inventory (stealing from someone will result in your Heat reaching 100 if a guard sees you.) To take a character's outfit or weapon, you must move to the profile tab. Outfits can additionally be equipped to characters, by removing their current outfit and pressing select/interact on the chosen outfit while in the profile tab.

The profile displays many of your essential stats and other information about the character.

The first four bars at the top show your name, your job (will show "unemployed" if none), your time served in the prison (in days), and your Money. An NPC's profile displays Opinion instead of Money.

The next bars show 6 important stats (Strength, Intellect, Fitness, Health, Stamina, and Heat). They include a blue bar to visualize progress in each stat and a number for specification.

Then you have two item slots. The first one displays the item currently in hand. The labels on the right will show the damage, speed, and range of the held item (if it is not a weapon, then descriptions will show "N/A").

On the right is the outfit you are currently wearing. You can take it off by clicking on it, but you must have an empty inventory slot (which cannot be the 1st slot). To put an outfit on or swap an outfit, click the outfit in your inventory you want to wear (you don't have to be in the player menu to do this). The label "type" will show you what you are disguised as ("N/A" means you're naked). The "defense" label shows defense offered by the current outfit. It uses the same ratings as weapon stats, also showing "N/A" if the oufit has no defense.