San Pancho is the fifth map present in the main game, preceded by Jungle Compound and succeeded by HMP-Irongate. The prison holds 16 inmates (yourself included), has 10 Guards that never patrol in the compound except 3 for Routine, has an electric fence around the prison and a jeep patrolling the outside. It holds 4 inmates per cell. Most of the time there is an unoccupied desk in your cell. It’s easy to get away with stuff guards won't like such as chipping walls because they don't patrol the area except in routines. San Pancho's security is very high, as it has a 2 block thick perimeter wall and landmines in between, making an escape above ground nigh-impossible. In the Mobile/Console editions with HMP-Irongate nerfed (Camera in only half of the cells and guards only use batons), both prisons can be found equally hard.

San Pancho also has its own unique free time music. 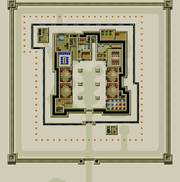 A brutal prison with unforgivingly hot weather, San Pancho makes the inmates so ferocious and bad-tempered to the point the guards are frightened of them. Guards do not patrol the inmate section of the prison whatsoever, allowing for the player to get away with a lot of illegal activities. Three guards will be present at meals, exercises, showers and roll calls.

In addition to that, the prison lacks any scanners to detect contraband, making foil useless. Cameras are also not present except for the Solitary, the kitchen, and the cargo job room. Also, if your heat reaches 80+ you will not be shot by a sniper, they only attack if you stand on the roof.

The prison features landmines (Marked as orange dots labeled 'M' on the map) at the perimeter of the prison beyond the Electric Fence, forcing the player to tunnel underground for their escape. Attempting to cross the perimeter beyond the fences on ground level will kill the player at all circumstances.

Landmines are invisible on ground level, however they can be seen underground and will take one block space, displacing a usual dirt block. Landmines will explode if a player approaches ~3 block radius on ground level. They will also explode if a player comes into contact underground while tunneling. They deal infinite damage, instantly knocking out the player and sending him to Infirmary or their cell depending on the time.

A jeep patrols the perimeter of the prison beyond the Electric Fence, further deterring escape attempts. If you are caught by the jeep while wearing POW Outfit or its variants, you will be immediately sent to Solitary. They can be avoided by wearing Guard Outfit at night or by using Stinger Strips to destroy the tires.

Guards will only be present to supervise at Roll calls, Meals, Exercise periods, and Showers.

You can stay out of your cell after Lights out (without a Bed Dummy) undetected for approximately ~1 hour in game time due to the guards very rarely patrolling the cells.

4. At the wall of the Tailor workshop, chip away the wall so you can get into the tailor station. (The station is located near to the Deliveries job workshop.) An optional way to do it is to get the Tailor job. Just distract them by ether knocking them out and stealing their clothes repeatedly, or hit them once and run around the courtyard until 13:00 when work ends. This will allow you to use work periods as a time to safely work instead of during other periods.

5. Chip the wall beyond the station, so you have access to the maintenance tunnel (the area with a black tile floor). You should see a ladder, and a prisoner stash. Cover the two holes with a Poster, or you'll be sent to Solitary.

6. Obtain a very good digging/chipping tool. Multitool is the best. You will also need a good cutting tool; Sturdy Cutters are the best. 3 Wires are also necessary in order to make a Fake Fence. However, likewise from my experience, there is no need to bring a Fake Fence like you will see in step 13.

8. Find a guard with a Utility Key. This may be an issue to even find a guard alone because they only patrol outside the prison unless conducting showers, meals, exercise periods, and roll calls. Take his outfit, the Utility Key, and Baton if needed.

10. Do the same with the guard with Cell Key ( or you can forget the cell key and chip some walls to navigate around the prison without it), or cut a hole in the cell's fence and hide it with a Fake Fence.

11. Go to the maintenance tunnel of the tailor station, then dig down. Dig straight until you meet a blue fence. Remember to brace the tunnel with Timber Braces! (Make sure you DO NOT dig under where the Prisoner stash or ladder is otherwise you will end up hitting a landmine later on! Although digging under a landmine doesn't do anything, so just dig past, or move to the left or right from your escape hole 1 block.)

12. At nighttime, put the Bed Dummy into your bed. Put your Guard Outfit on. Your inventory should look like this: Plastic Utility Key, Plastic Cell Key, your cutting tool, and Fake Fence. Go to the canteen (Eating place). If you did not make a plastic cell key, then you will need to chip through to either the garden supply room or the kitchen, and then to outside. connected to the canteen there should be a door with a orange lock (cyan on console) and beyond the door, a ladder. Go up to the ladder!

13. You should be on the roof. Go north, then you'll see the Generator. Cut the fence near the Generator, shut off (Left click), put the Fake Fence where you've cut it or just leave it. (Only from my experience). then run back to your tunnel as quick as you can, then cut off the electric fence as soon as you can. It'll no longer zap you because the Generator is off. If you are too slow the generator will turn back on and you will need to repeat this step.

15. Whenever you have free time, go to your hole, and dig straight until you reach Reinforced Concrete. It's like a square-ish rock, but you cannot dig or even chip through like stones.

1. At night, put the Bed Dummy into the bed and equip the Guard Outfit on. Your inventory should look like this: Your digging/chipping tool, 3 or 4 Stinger Strips, and extra food (optional)

2. At the very end of your tunnel, wait until you hear the perimeter jeep. After the jeep sound is gone, dig up!

3. Cover the tunnel with the Dirt you just obtained. Put one Stinger Strip one tile below you. That's the route for the jeep, and the Stinger Strip should flat-tire the jeep. If you did not get stinger strips, then follow the wall counter-clockwise to the entrance at the south end of the prison, where the wall is one layer thick instead of two, and chip through.

4. Put the next strip 4-6 blocks left to the first strip. But, don't walk around, or you'll be blown up immediately! If you want to walk around, hug the edge, as if you are stuck to the wall. Don't get out of the wall except if you place the strips!

5. Now, chip the wall where you want to chip. Careful of jeeps, but they'll be disabled with the strips. When they get flat-tired, you'll hear a shooting sound. There are two layers of walls, but if you get through them, you can say goodbye to San Pancho!

Another way to shut off the generator WITHOUT keys is to get a good cutting tool, Grappling Hook, a Sheet Rope, and a Fake Fence.

After evening roll call, go up the ladder in the maintenance tunnel of the tailor shop. Go east and use the grappling hook on the wall. Keep going east and use the sheet rope.Go to the generator and cut the fence surrounding it, left click to shut it off, and replace the broken fence with the fake fence. Run as fast as you can back to the tunnel and cut the fence, since the generator is off and it won't shock you.

Land Mines surround the entire perimeter of the main prison complex beyond the electric fence. There is no way for the player to escape on ground level, as the mines will explode no matter where you try and escape from. Therefore you must tunnel out to escape.

The best way to escape is to start in your cell and use your desk to cover the hole. Dig west (to the left) until you encounter the underground fence.

The fence cannot be cut, as it is electrified. You must first go up on the roof to disable the Generator. The recommended way to do this is to place a bed dummy in your bed after lights out, and exit your cell into the canteen and enter the utility corridor to the bottom right of the canteen. The ladder will go to the roof and the generator will be directly up north from the ladder. The generator will restart after 1 in game hour, so you've got to be quick! Be advised that the generator on the roof is surrounded by a fence, so you must bring a cutting tool to the roof with you.

Once the fence underground is cut, you can continue digging your tunnel. In your tunnel, dig a few spaces west, and you will be able to see the land mines. Dig your tunnel around them, being careful not to touch the space they occupy or they will explode. Dig your tunnel a good 4 or 5 spaces past all of the mines and then you are safe to dig up to the surface to escape! Beware of the patrol jeep that circles the perimeter above on the surface beyond the mine field. If the jeep rolls by and spots any damage to the surface, even an incomplete hole, you will be sent to Solitary. Note that the jeep goes counter-clockwise around the perimeter (so if you are on the left side, the jeep will be coming down south). You can hear the jeep pass by from underground. Wait for the sound to pass and then dig up. Alternatively, a Stinger Strip can be used at the surface to disable the jeep, but since you are digging, this is not a viable option.

Every time you start a new game in San Pancho, the land mine placement will be generated randomly, but in the same vicinity. So one playthrough you may not have a mine blocking your tunnel path, but another game you might have several mines in your way! Always be prepared to dig around the mines whenever you play San Pancho!