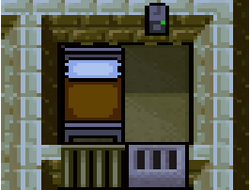 Solitary Confinement, or simply Solitary, is the place where you will be sent for extreme violations during your sentence.

Solitary contains one bed and most of the time, one Camera. In The Escapists 2, every solitary room will additionally contain a sack of potatoes next to a chair (see bottom of page for info).

Reasons that you can be placed here and how to avoid them:

In The Escapists 2, these will instead cause a Lockdown, unless otherwise noted, but you will be sent to solitary if you are knocked out during one. This is likely due to the multiplayer aspect of the game. In the original game, you will be sent here instantly if any of these conditions are met regardless of your location.

In The Escapists 1 while you're in Solitary, you'll skip three days and all of your skills will be decreased by 10. All Contraband items that you've placed in the prison will be confiscated, as well as all holes in your cell plugged and all broken/chipped walls (even covered with posters) removed.

In The Escapists 2, you will lose every item you've got in your inventory. You will stay 2 or 4 real minutes time (2 or 4 hours in game), and you will stay longer if you have been to solitary before in that prison, with sentences starting at 1 in-game hour and increasing 1 more each time, although it caps at about 3 in-game hours.The time you are in solitary, you no longer have to do your routines. You can accelerate the remaining time by peeling potatoes, though this can decrease Stamina so you may need to use the bed to rest up.